So this week in latex it’s been a more magical week with working three days for Guildford council at “The Village” at the bottom of Guildford high street.

So the worry was finding the place on the first morning and where we would end up parking. Well no problems at all the Sat Nav got me there although I did have to drive around the bus station lane but it did say also includes access so hopefully there will not be a letter in the post to me. Unloaded and then they had a parking space for me on site so an extra bonus. The only problem with day one was we only performed one of the four shows due to the weather being so bad. Day two and three improved weather wise and we got four 30 minute shows both days.

I was rather tired though after day three and pleased I did not have any shows over the weekend. Off again next Wed/Thurs/Fri to do it all again, I will try to pace it a little better this time and also take some sun tan lotion as we did go a little red with being out in the sun for all four shows.

Now one should always try to analyse why this is, firstly the website advertising the event has me down for four magic shows so that is the first thing to overcome as I explain the format of the day and then one has to look at the content of the balloon show. I make a nice large design balloon while chatting away and adding a few laughter lines into the build and then the children and adults have to win the balloon by guessing something that is written down.

I up-scaled a minion that I make from a 350 to a 646 this week, I will use this next week when we do the balloon game show and also the tree I make I generally use 260’s for the leaves but will up scale to 350. Everything needs to upscale as much as possibly as long as we still have the pace correct during the show.

The plan is to carry on with the two separate shows as it’s nice to have some variation in the day and I will try to make the balloon show stronger as the contract continues. “The Village”

I have Zakh my grandson coming over tomorrow to help us with the orders and to put away a large balloon order that arrived. If we have time we will also go to the local dump to get rid of some of the excess cardboard boxes and other general rubbish we have accumulated over the past few weeks.

It’s not BalloonTube Sunday this week, so I will give a plug to the balloon that changed my life and got me seriously into balloon modelling, the good old one balloon hippo. BalloonTube.

If you wanted to know a little more about myself I did do an interview over on balloon chat back in March 2008 so coming up for 10 years ago now, do I feel old?
Yes but that is because I am old, Interview.

Off to find a random balloon model of the week to post.
I thought we would add this months balloon chat competition.
The step by step instructions are up on the forum for those that
would like to have a go at the design. Crown design. 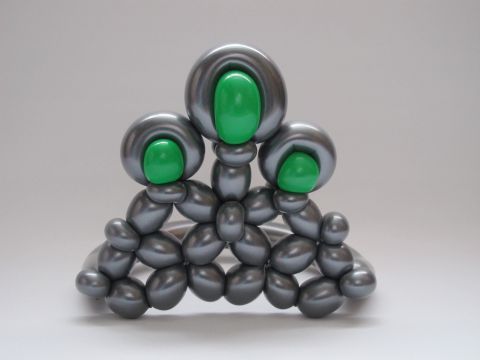