It was the City of London Jam on Tuesday last week and was nice to catch up with Kat and Susie for Pizza Express lunch. I think I have missed the last two meetings due to other conflicts. We took a few pictures from the event and I had a play with an eagle design that I have never made before. Pictures.

I have been confirming up lecturers and dates for up coming events for the balloon artistes guild. I have been speaking with Pascal, Juho, Phileas, Sean Rooney, Cristopher Lyle and Lindsey Foster. It looks like we are all booked up for quite a time to come. I was looking for an allied art to compliment balloon modelling, a mime act, performance, clown etc. Trying to think outside the triangle so to speak, as yet nothing has sprung to mind and I have posted out over facebook for ideas and suggestions.

I’m working down in Woking on Tuesday for lightbox, it’s a library come entertainment centre. I did the event last year and enjoyed it and pretty sure it will be another fun event this time around as well.

We filmed seven tutorials for BalloonTube on Saturday last week, all went pretty well and the disk is down with Lord G to do the editing. We are now all filmed till the end of the year with a tutorial going out every other week. Possibly in the New Year we might go to a new tutorial only once a month, thinking about that at the moment. I also took down the master for the Doctor Bob workshop for Lord G to edit for the club as well. BalloonTube.

The majority of the pictures are now up from the Linda T and Doctor Bob workshops that were held at the beginning of July in Sutton. Pictures.

The next care & share days are the Levett and Lee days in Sept, 5th in Airdrie and the 7th in Birmingham. Both days are just £20 to attend with some early bird specials still being available. The plan is for the days to be a little more basic for the entertainer/magician. I will be showing the designs I make during my magic show and also a couple of balloon games and for the first time the design I always finish off my balloon modelling set with when it’s time to go. It always gets a good reaction and a nice round of applause to finish off the set.  Levett & Lee Days.

That’s me for this week, off to find the random balloon picture of the week.
I went with the eagle that we made at the City of London Jam this week. 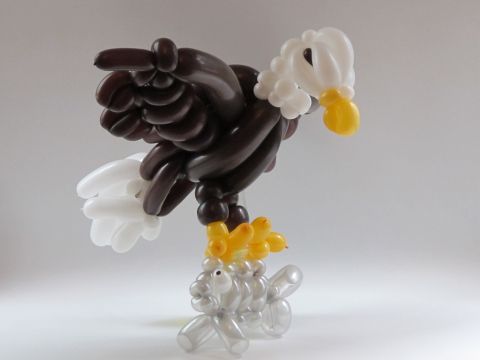