This week in the world of latex , well I had to take the car in for it’s MOT and yearly service. It needed a few things doing , all new brake pads, two new front disks. And surprise surprise two new rear shock absorbers, which is not surprising really as the amount of product we carry about with us to some of the days and conventions. It did cost a few pennies but I try not to moan about the cost as the car is used so often and is a good old work horse.

I went to my local magic club on Thursday to see Shoot Agawa, what can one say, a fabulous night from a person who has dedicated his life to magic. A joy to watch if you get the chance.

My plan for Wednesday was to do some filming for my BalloonTube channel, I got everything sorted but was struggling to set the lights up to get rid of the shadow and thought I would give up on the day. Well I’m glad I did as 30 minutes later a neighbour had a few people in to cut down 2/3 of their trees so the noise of all those chain saws and then the shredder machine chopping up the branches to pulp I would have had to stop anyway. It also proved a busy day on the phone and with orders so there was no way any filming was going to happen.

So we decided to film on Saturday when we do not have to worry about shipping orders out and I only had an evening balloon gig. All went pretty well, four items were all filmed in one take, the shield, fox, cat and horse. The elephant was two takes as a pinch twist for the mouth popped on version one. The teddy was I think three takes as I changed the way I built it half way through and then when I went to film it I was half way through and forgot how I was going to explain it, we got there on version three.

In all the six items took 3 hours to film which is what I allow, usually 30 minutes per design. So we had time for the bonus design which was the weaved heart made from three five petal flowers. Now it’s made from four flowers as yet again while filming I thought of a better way to explain the design and now it uses three five petal flowers and a seven petal flower but looks so much fuller………well to me it does so was pleased with the new look and we filmed it in one take which surprised me as there is quite a lot to go wrong on the complex design.

It’s surprising how tiring the filming is, I was pretty exhausted after the four hours.
I suppose it is a little full on making sure you are in the correct position to camera and
always in shot with the twists etc and also trying to explain things simply and to the point.

The tutorial for BalloonTube this week is the ride in horse design. BalloonTube.

I’m off later to do another evening magic show with an hour of balloons after,
so two evening gigs for Saturday and Sunday this weekend which is a little unusual.

All the pictures are up on balloon chat form the Linda day last week, I’m still loading all the photos from the second day with Doctor Bob so hopefully they will all be up by next weekend. Memorial Lecture Pictures.

It’s the city of London balloon jam on Tuesday, at the moment not sure
if I will be able to attend but hoping too. City of London Details.

Well that’s it for this week, off to find the random balloon picture of the week.
I thought we would have a couple of elephants that I filmed for BalloonTube.
They will not be posted for 3/4 months though as we have everything filmed
for this year and I only post a tutorial every other week. 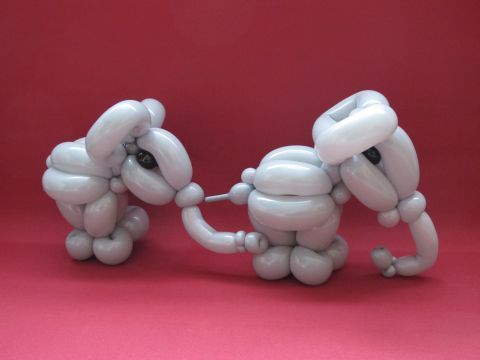