Well this week I was booked for a music festival on Saturday and something happened that I have not experienced in my over 30 odd years in entertaining. I was booked via text message which is not my favourite thing but some people like to book this way. Many messages back and forth deciding type of show, how long, fee, venue and as outdoors cover. It was booked back in May. This week I also got a time change message as it was on in afternoon and clashed with the England v Sweden game so was moved from 3 till 6 to 11 till 2. Then on Thursday I got a message saying as we had not agreed a fee the only way I could attend was if I agreed to sell the balloons and there was no fee. I screen grabbed the fee discussion and sent it to them. So there were a few messages back and forth telling me I was not booked as I had not sent a confirmation letter or asked for deposit. It was getting a little awkward but I was polite and said I would be there at agreed time and for the agreed fee.

They messaged to say do not turn up and security would not let me in. So I drove to the venue and it was just a school fair and not a music festival, I introduced myself to the lady who booked me who said sorry but you are not required. It was very awkward but there was a principal here for me as I was definitely booked. I did explain I would be sending an invoice to the school and she mentioned OK that is the head mistress there who you can send it to. I started to walk back to my car and thought well as I’m here perhaps I could chat with the head mistress and she can view the text and see what she thinks. So back I went into the school and waited to speak with the head mistress, I felt like a naughty school boy there waiting. The headmistress was nice but being protective and distant which I suppose was understandable and did not want to see the text messages. Only asked if I had a contract and if not that was the end of the matter, so just before I left she said ok let me view the messages. After she read them she went straight off and asked me to wait, came back two minutes later. Now I should say that when she was reading the messages I had decided that if she agreed I had been booked I was just going to walk away as I did not want to be there. It was a very uncomfortable situation and I was rather upset about the whole situation and wanted to be away form the school ASAP. So she came back and said they would honour the agreement, so I was right they did book me. I explained I did not want to be there now and it might be better if I left. They had plenty of other entertainment there so I was not letting anyone down, on the way out I did say how awkward I felt coming down and that I was really a nice person. The head mistress said about me loosing out financially and I said well perhaps later in the year you could book me for a magic show for the school. She said yes and I was assuming not to hear from them again to be honest although I had planned to send an email to thank her for looking at the messages and for giving up some of her time as it was appreciated. So Saturday night a text comes through from the headmistress apologising for the way I had bene treated and she will call me next week to book the magic show. I was rather pleased about that, so that was my Saturday which was pretty awkward, on the drive home I was shaking and stopped for a coffee. But the text in the evening turned things around so that was nice.

I was making Bill & Ben the Flower Pot Men this week, all the pictures are up on Balloon Chat, Bill & Ben.

Off to find a random balloon picture of the week.
This is Helen and I at the Twist & Shout Balloon convention
in Las Vegas this February, I upscaled the balloon dog
that I posted last week onto BalloonTube, Sausage Dog. 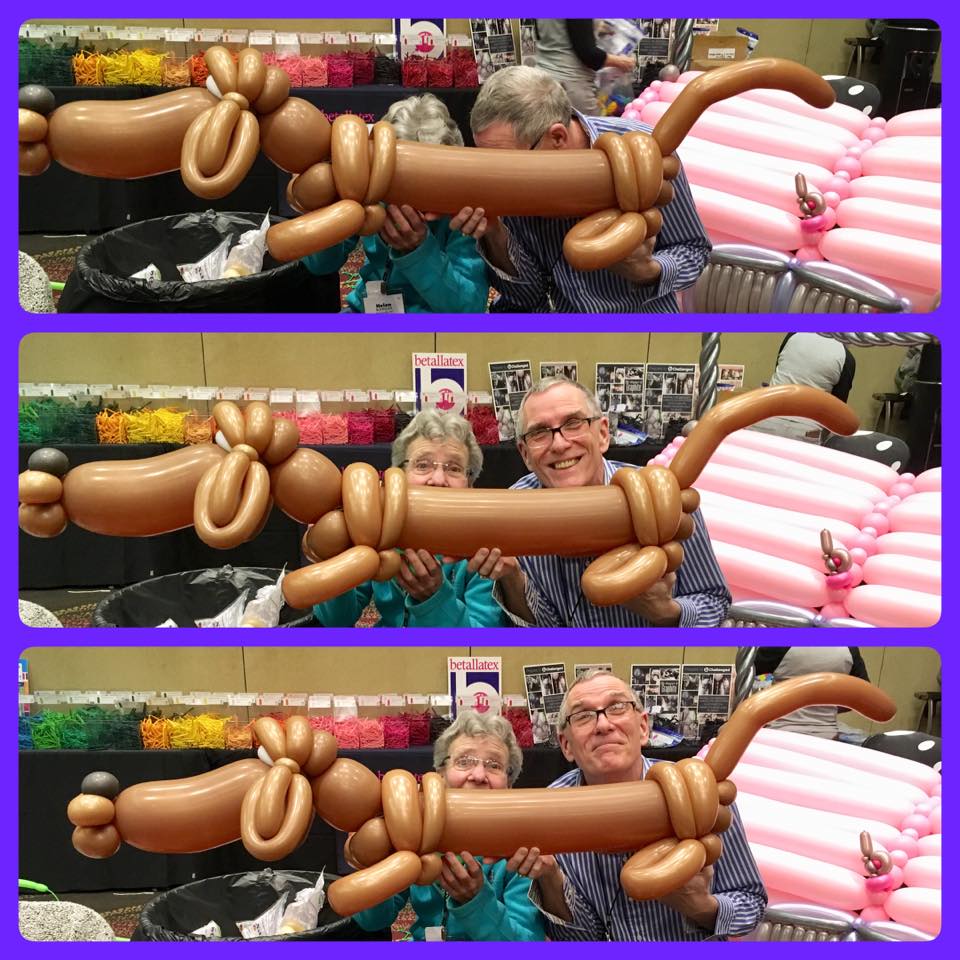