Following on from last weeks blog about the school booking, the headmistress called me this week and there was I assuming she would book for possibly the Christmas fair in Decmeber…………..nope I have been booked for two shows this Friday so that was very very nice and I was rather pleased with the outcome.

Its the London jam this Tuesday 17th July near Liverpool Street station, for more details the facebook page is, London Jam.

All the pictures are up on balloon chat for the last star lecture day with Patrick van de Ven
and Paul Brown. Pictures.

We held the Sutton basic balloon day on Wed and it was fun and I think those attending did learnm a few new balloon designs while having a bit of fun along the way. It turned out to be the smallest balloon day we have run over the 12 years with just seven people attending. The venue, Sutton Utd football club has undergone some major changes due to the FA Cup run they had. You nearly did not recognise the venue, it looked very nice. I have posted a few pictures from the day, Pictures.

We did the second premiere for the film The Incredibles 2 on Sunday with all the stars form the film attending, the only person I saw that I recognised was Melinda Messenger. I have posted a few pictures from the red carpet, The Incredibles.

I have taken a stand at the International Brotherhood of Magicians convention in Sept that is taking place in Southport. This used to be one of the major conventions of the year with people attending from all over the world and over 70 dealer stands. They used to have nearly 1500 people attending, like other conventions it has got a lot smaller over the years with only a handful of dealers and very few registrations but I have supported the event for many years and will be doing so again this year. I will be running two balloon workshops so if anyone
would like to attend then more details can be found here,
IBM Convention Website.
Facebook Page.

Off to find the random balloon picture of the week.
Not sure I have been doing too much balloon modelling this week.
I went with Bill & Ben the flower pot men, this was a TV show from the 1950’s. 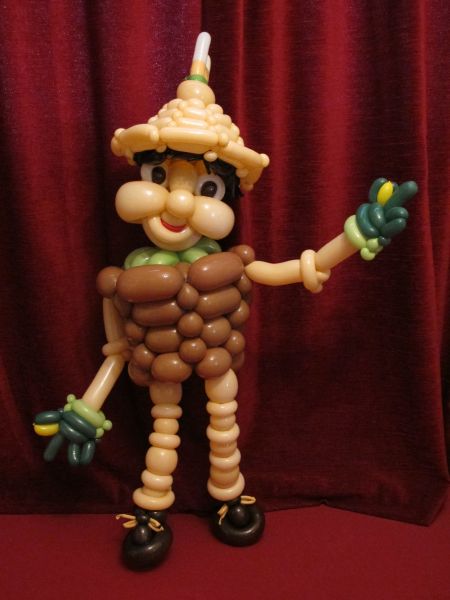