It was back for the last three days at The Village in Guildford this week, day one was a wash out due to the rain all day long and the venue is outside. We had much better weather for the last two days but numbers watching were not fantastic, oh to do some advertising and let people know we are there doing shows.

It was fun though but very tiring doing four 30 minutes shows per day…………….
especially at my age he he.

I’m now getting ready to travel up to Scotland for the Airdrie Levett and Lee Balloon Roadshow that we are doing on Tuesday 5th Sept and then again on Thursday in Birmingham on the 7th Sept. There is still time to book if you would like to pop along and see Thelma explaining her WOW designs and myself explaining all the lines and bit’s of business I use when making balloons during the magic show. We are also planning on showing a couple of balloon games as well so plenty to see during the day. Booking details.

I was planning on staying up in Scotland for the IBM magic convention but a really nice job that I did last year came in for this coming Sunday so we went to plan B and put the Birmingham day in on the way home so I could do the balloon gig on Sunday for British Airways.

I made a nice new two balloon car this week which has gone straight in and is the model of the month in the competition section for September. If you would like to have a go at making it here are the detailed step by step instructions. Racing Car.

BalloonTube still seems to be popular which is nice and getting a few hits, last week we put up the tutorial for an Elephant and I have three to choose from for next week, it might be the Koala Bear, then again it might not. I will have to make my mind up. BalloonTube.

I’m still to start recording the balloon magic act I used to perform, I promised this would be ready for November so might have to get my finger out now and get this all sorted, maybe when we get back from Scotland………………maybe.

Anyway off to find this weeks random balloon model to post.
I went with the tank, the main body and sides are made
with 350’s the gun a 160 and tracks are 260’s. 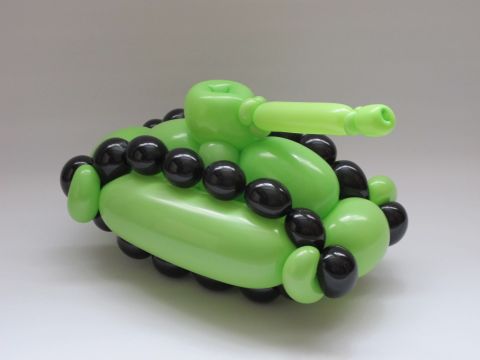