It’s been an exciting week this week, possibly for the wrong reasons. I purchased a fiat doblo a couple of months back and it has always sounded not quite right when starting. It had to go in and the air con needed to be checked due to there being no gas in the system and the garage assumed there must be a leak. So as that was booked in I decided to get the car fully serviced although it was meant to have been serviced when I bought the car less than 1000 miles ago. Well around lunchtime the garage called and said could I pop down as they wanted me to see the car while it was up on the ramp. Now I have been using the said garage for many years, possibly 20 so I was assuming there was a bit of a problem.

That may have been an understatement; it looked like the car was stored in a field for months with mud and grass all on the underside. There was rust everywhere and the air con condenser had blown and was just falling apart in your hands plus piping was rusted through, you would not believe the rust. On the brake discs more than a third was rusty so only about 2/3rds of the brake pad was actually connecting to the disks.

You had to see it, also the passenger front door and off side rear were not lining up and closing properly. This was because the car had been in a serious accident with the front near side wing being replaced and possibly the nearside front door as well, it was now all out of alignment. I said it had been an exciting week.

I have called the garage, as I bought the car from a main dealer and my garage were really shocked how a car in the state of repair could possibly pass all the tests and have been serviced. The car as it was would have failed its MOT.

One can only assume the car was not looked at or serviced as described. I’m in discussions with the garage about a refund, they have agreed to the purchase price being refunded but they are not willing at the moment to pay the extra insurance/change of tax fees and the cost I paid for the service plus the drive down to Cornwall to return it.

Hopefully we can work something out and now I have to try and find another new car, this last one took me months and I do feel a little under pressure to sort something out ASAP. I have been looking at the Nissan NV200 Combi vans but they are a lot more expensive and I’m still in love with the old fiat Doblo.

On a brighter note I had a lovely gig down in Wokingham today with a 10 till 12 and a 2 till 4 balloon modelling sessions. There was a wetherspoons in the precinct that I was working in the morning so I went there for a spot of lunch and to look through the internet for some fiat Doblos, no luck as yet.

It’s BalloonTube Sunday this week and we are doing something a little different, a weaved love heart made from a basic flower design. If you could share the link and spread the word a little that would be great. Weaved Heart.

Off to find the random balloon picture of the week,
it might be a shark as I have made a few of those this week.
I went with the green dog for Debs, this is made for Deborah Fellman
who has been diagnosed with stage 4 cancer and the balloon community
are sharing there love with #GreenDogdForDebs and I wanted to just play
a little part in this. Deborah XXxx. 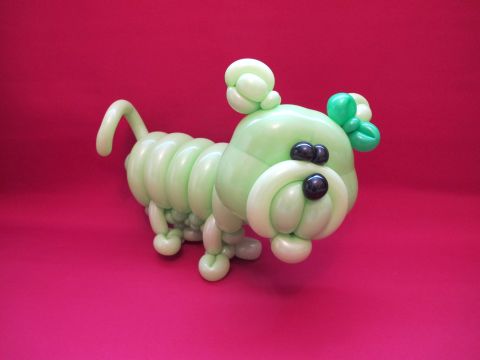