So this week in my little balloon world we have been sorting out and organising the balloon days that are coming up for this year. We have five days all booked and confirmed with Darren Mortiboy and Twistina in March. Roger Daws booked for April and Linda from Germany and Doctor Bob booked for July and we are also in the process of booking Sam Cremeens from the USA for November time. The other dates I’m looking into are May/June time going over to Northern Ireland and then September time up to Scotland. It all takes a little time with booking halls, checking flights, dates available etc and then double checking events in Europe so people can come over and double up as that helps the club out with expenses.

Also checking dates for the British Juggling convention and the International Brotherhood of Magicians conventions as we may attend both of these events as well. The juggling is at the end of April and The IBM is early Sept up in Scotland so I can double that up with a Scottish care & share day.

BalloonTube this week is the Bow & Arrow game if you would like to have a look. I was nearly up to 10,000 hits and then looked on Friday and that had dropped to just over 8,000. No idea why, perhaps those doing the maths had a glitch. We are just short of 500 people being subscribed to the channel which I’m pleased about, fingers crossed a few are getting some ideas from the designs I have been posting. BalloonTube.

I have been playing about with a car design this week and also a racing car, David Crofts popped up for a few hours on Tuesday to help us re-design the balloon warehouse (The Shed) so after we had a little play with the cars and a light sabre or two. I did post the pictures onto balloon chat if you would like to take a look.

Getting ready for Blackpool Magic Convention that starts in just over two weeks time, getting stock in and working out what will be popular to take and what not to take so much off to the convention. We always get it wrong and sell out of something or other but we only have a small van and it’s impossible to take the full product range with us. We are in the main hall this year, not sure how long we have been trading at Blackpool, I think possibly 12 years now with the first 5 being upstairs on the balcony. Then we got a nice spot in the smaller of the two halls, the only problem for us was that it’s the furthest point away from the entrance and exit set up doors. We are now next to where Derek Lever had his stand which is right next to the set up doors and against a side wall so fingers crossed it’s a little easier for the get in and out and will work well for us with hopefully more people walking around the main hall.

Off to load up this weeks BalloonTube tutorial and to see what random balloon picture we can post for this week. I went with the rabbit which was last months model of the month competition on balloon chat. The step by step instructions are on the forum if anyone would like to have a go at making it, Rabbit Design. 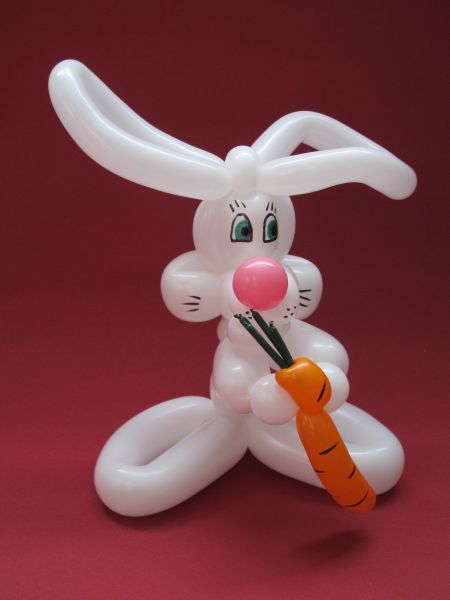