So what have you been doing this week Graham?
Well I’m glad you asked…………….not a lot really.
Just plodding about catching up with things, emails all up to date, balloon orders all up to date and had a magic show yesterday. Luckily I did not have a show today otherwise I would have had to cancel. I think I have an inner ear infection as when I went to stand up this morning the room started to spin so I had to lay straight back down again then things were fine. This happened to me about 10 years back and was the only time I was unable to get to a magic show. My daughter does bouncy castles and could do some basic balloons so she and my son covered for me. They said it was chaotic but at least it was better than letting them down completely. I eventually got up just before 5pm so really an in-usual day for me.

I have put the step by step instructions up for the Rocket over on balloon chat, this is going to be the Model of the Month for April. Rocket.
It will also be the next tutorial on BalloonTube next Sunday, the step by step I have made is different to the one described on BalloonTube as this was filmed a few months back and things keep evolving. I think the step by step way is quicker for the real world and it all holds and fits together better. There is only one way to find out what is best for you and that is to make them both.

Have a team building day this week a little different. I’m one of a few showing people how to make things and then they will all have a go, like the generation game but makes a change and good to be out working mid week.

All the pictures are up from the Twist & Shout convention I attended in January. It took a while but I finally got there and have posted over 700 pictures to view, Twist & Shout.
Also all the pictures have been posted from the two day event we had in March with Wallie de Groote coming over from Holland. Wallie Pictures.

Off to see what we can post as the random balloon picture of the week.
At the moment I’m thinking it will be the Rocket but you never know.
Off to look, I went with the whip that I made a few weeks back now.
50 Shades of Graham! 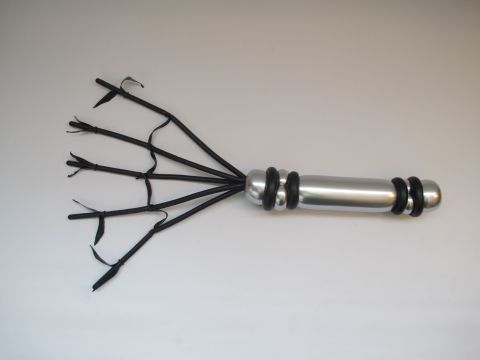