I did a nice magic show this week for three birthday children, all went well except they ordered Pizza for all the children and it never turned up. I did an extra 15 mins while they went to the local shops so they could quickly make up some sandwiches. Crisis over.

Been sorting out the master copy of the Eric Weinstein DVD ready for club members at the next Star Lecture day that is on the 19/20th Nov with Pip Pippity Pop coming over from New Zealand. We still have some spaces available if anyone would like to come and see Pip,
the days are open to all, members and non members. Star Lecture Tickets.

Been trying to make a quick female figure this week for an event coming up in the new year, nothing like planning well ahead. I was looking for a quick twisted head structure which can be difficult when trying to make a female character. Sometimes it’s best to use a round and distortion but I was trying to keep it a little simple and old school.
Its getting there. Female Face.

Off down to Hastings later today to go and help with a new magic act that Olivia Post and Mike Ingham are putting together, Wattle and Daub is a medieval jester act and now they are adding some mind reading to the show. Wattle and Daub.

I worked at a Halloween event in Twickenham last year and they have kindly invited me back again this year, there is no accounting for taste but it was a nice night last year so hopefully
the weather will be kind again as it’s an outdoor event.

That’s me for this week, on BalloonTube this month we have the Pumpkin design if anyone would like to make. Two versions, the easier and then the more detailed, hope the help. BalloonTube Pumpkin.

Off to find the random balloon picture of the week.
I made this possibly over a year ago, its from a piece of jewellery
that I saw and liked and that inspired me to try and re create it. 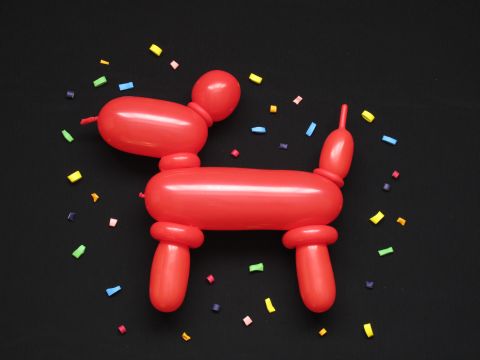