We got back home safe and sound from Bodmin.
Enjoyed the balloon day, even though it was the smallest care & share day that we have
done in the now 13 years we have been running them. Would I go to Cornwall again?……………………….Yes, but we would need to get 15 confirmed for it to happen.
All the pictures are up from the day, Bodmin Pictures.

This week I have been making flowers and posting onto Facebook, a little tongue in cheek as saying that I was making them for a specific friend. The first design I posted although very simple did look completely different to any other designs I have seen and it got a super number of likes so that was nice. I did post a few designs onto Balloon Chat, Flowers.

Now getting ready for next week to pick up Linda T and her daughter on Friday morning who are flying in from Germany. Linda along with Doctor Bob are running “The David Grist Memorial Lecture” for this year. There is still time to book if you would like to attend,
Memorial Lecture.

I have been booked to run a workshop at the Children’s magic convention, Kidology that will be on in September on the 25/26th. The full like up has been announced with Sooty being the star of the show with a Children’s entertainer of the year competition being held with the star prize being a summer season for 2018. Kidology Convention.

No BalloonTube this week but next week we will be posting? Well I’ve not decided yet but it will be back to a multi balloon design. I think we have six filmed so I will make a decision next week on that one. To view some of the other tutorials, BalloonTube.

I missed the London jam this week due to getting back late Monday night from Cornwall and the jam was on the Tuesday. I have not seen any pictures from the event so not 100% sure it went ahead. I’d better double check and see and if so will add a link to some of the designs made.

I have to book a basic balloon modelling day for later in the year, I might try a central London location as we have never done this before. Will be interesting to see the numbers that may attend, I would also like to run a weekend event to see how that would work as well. One is always looking for moving the days forward and appealing to as many as possible.

The random balloon picture of the week for this week is not going to be random.
It’s the first flower design I posted this week that seemed to be very popular.
Anyway till next week…………………………..love and kisses xx. 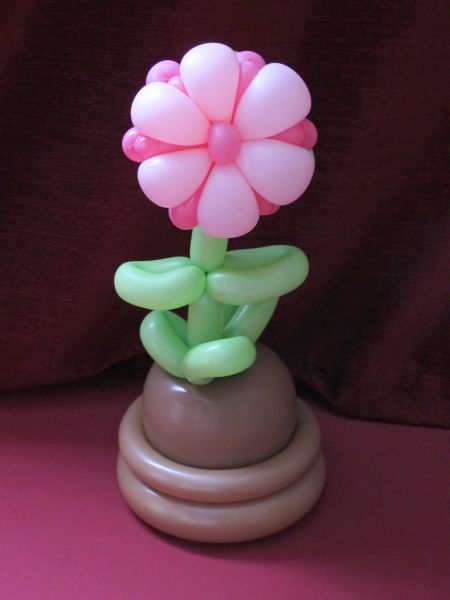