This week………..we have been doing more balloon modelling. As if there would be anything else to do. I went down to the Portsmouth balloon jam that was quite exciting before it even started as they closed the shopping centre where we meet for lunch and the venue due to an un-exploded bomb being found in the harbour. I was with Rob at the time so he had to quickly find a new venue and I went to pick up Susie and Kat who were coming on the train and got diverted to another station. All worked out OK considering, a nice meal in the pub and a few hours twisting. I think a couple who were coming over from the Isle of Wight were unable to make it as the ferry’s were stopped for a few hours as well.

I had a big build with David Crofts this week, we started Thursday night and I have been twisting away for about 20 hours over the coming days. Just got back from setting the designs up at a birthday party. I have started to post the pictures onto a thread over on Balloon Chat. Pokémon Go Pictures.
It will take a while to post them all as we took many as the designs were being built so please look back over the coming days.

Now off to pick up Matt Falloon from Oxford as he is over in the UK for a couple of days running two balloon workshops. There is still time to book on if you would like to join us tomorrow and Tuesday, 21st and 22nd Nov.
Matt Falloon Workshops.

Next week we Have Alberto Nava and Daz Cooper running workshops in Birmingham, 29/30th Nov. The link above will have those details as well.

BalloonTube, this week it’s a one balloon dog that is a little different to others I have seen.
I hope you like it and it will be of use to some, BalloonTube with Graham Lee.

So what will be the random balloon picture of the week, not sure myself so off to look,
be back in a while. I’m back and went with the car which I was rather pleased with.
There are more pictures on balloon chat with a smaller 260 version and details about
how the design came about etc. Car Pictures. 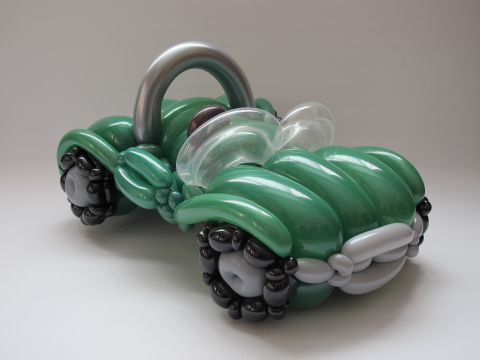