Here we are then on Sunday 17th Sept writing another balloon blog.
What have we been up to then?

After getting back form our world tour of the Levett & Lee road show I was catching up on orders, emails etc. All the pictures are up form the Airdrie day,
Levett & Lee Road Show.

I have just started to add the pictures form the Birmingham day, it will be a few more days till they are all up and on balloon chat. Birmingham Pictures.

We had a call from a TV production company asking for details about the 6 foot step inside balloons. They explained it was for a TV show so I asked when it would be filmed and was told the coming Wed, so two days time. I explained I was free and available to come up and consult for them, you can but try. I was being a little hesitant with the questions as it is a dangerous thing to do if approaching without the knowledge. They informed me they had no money in the budget to pay me.
On the Tuesday they confirm the order to buy the balloons and send a car to pick them up and asked if I would attend and offered me a small fee, I declined as they wanted me at the TV studio for 9 hours so with travelling it was a 12 hour day.

So Wed Morning comes and at 9.30 am I get a call to see if I can go up and help. They also offered me nearly what I had asked for so I was happy and it was a fun day out. A little stressful in the beginning as I could not find any parking at Morden station. They have two car parks that were both full and a few odd parking spaces around the side roads. The time I was meant to be at the studio was the time I got parked. I think we ended up being over an hour late.

As usual with TV there was a lot of sitting about and doing nothing, luckily I took my balloon bag with me so sat making some Koala’s, helicopter and a unicorn. I gave them all away to the production team so maybe some more work down the line.
During the day they also asked if I could go on camera and help with getting the celebrity inside the balloon, it was an unusual way to get someone inside but they did not want to go in head first. I was pretty reluctant to do this, what with the X factor and BGT and the way they make some people look with editing etc.

Anyway they promised it was just to get the person inside and as it turned out it was all OK…………..well fingers crossed it was. We will see when it air’s in January.

So that was my exciting week in latex, I also had a birthday party yesterday with magic and balloons and today I’m off to a 40th wedding anniversary with the family magic show and some balloons as well, keeps me busy.
We have confirmed the bookings for Wallie de Groote for March next year 27/28th.

We are also nearly ready to go with confirming dates for Christopher Lyle for June and now talking with Mark Byrne to see if we can get him over for Sept next year. Lot’s of things have to happen before we can confirm details, nearly there though. Hopefully with days announced so soon people can book them into their diaries and be able to attend.
If anyone would like to book on the days, including Sam Cremeens
from the USA on Nov 20th and 21st. Booking.

The random balloon model of the week? Off to have a look,
be right back, don’t go away……………
I went with the two balloon racing car, on the thread on balloon chat
I have now made this from four balloons and with 350’s. Racing Car. 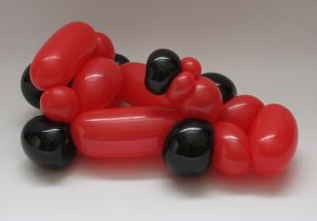