It’s been a busy old week this week, travelling around a lot to attend three events, two conventions and a care & share balloon day. Last Sunday I travelled down to Bristol to attend the 56th day of Magic, I was up at 5am and set off at 5.45 arriving at the venue at 8.45. I did stop on the way for a super value Greggs breakfast, £3 for a coffee and a sausage roll. Very nice it was as well, I quickly set up and was ready for the opening at 9.30. I enjoyed the day chatting to old and making new friends, it was good to see Richard Griffin again and to catch up. Richard was lecturing and appearing in the gala show, he has a lovely act and is a good old pro. I also enjoyed the gala show with the act from Argentina having a very nice way with him. Sales were a little slow but it’s all PR and you never know who might turn into a customer or who I may have given that spark to start balloon modelling. I travelled home after the gala show and got in just before 2am so a very long old day. Pictures.

We then set off on Tuesday night for Exeter where we had a Care & Share Balloon day planned for the Wednesday, we had a very good turn out with 30 people attending and many new faces which is always very nice. It’s nice to see all the old faces as well but to help the club grow we do need a few newbies to join now and again. Went for a very nice meal in a local pub that Ozzy recommended and it was all cooked fresh, most enjoyale and nice company as well. I think 10/11 went for the meal after. So we travelled home after the meal setting off about 8pm and got in at 1am so a few late nights this week. Pictures.

It was unpack the car, re-stock and set off again Thursday afternoon for Bognor as it was the clown convention starting on the Friday, It was a three day event but I was just attending for one with two workshops during the day. The last time the convention was in Bognor was I believe 3 years ago. It was nice to catch up with Caroline and Heidi, we go back a few years with them both and so it was nice to catch up with news and for a chit chat. Numbers were low on the Friday but I met two people who had never twisted before and they took to it like a duck to water, they were excellent considering this was there first attempt. In the afternoon we twisted an aeroplane and they followed along really well.
That was not such a late night, I was home around 9.30pm. My B & B was a little throw back to the 70’s and 80’s, no wifi, no credit card payments but a nice couple and he could chat for England. Pictures.

I have started to add pictures to the forum but it will take a few more days to add them all so please pop back and take a look later as well.

So that was my week this week and now we are getting ready for Trix in the Stix’s that is taking place next Monday and Tuesday 23/24th May, it’s a magic convention for the children’s entertainer. Very much looking forward to it.

Now for the random balloon model of the week, off to look, I wonder what it will be?
I went with the crocodile, more pictures of how he was constructed can be seen here,
he started life as a sausage dog. Crocodile. 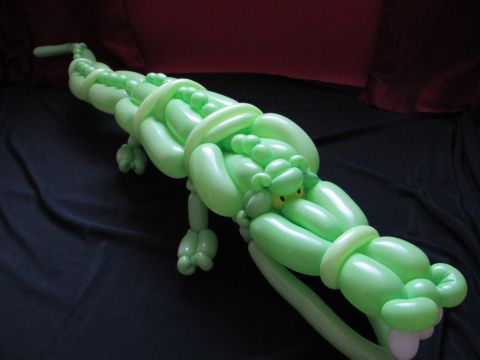