What has been happening in the balloon world this week?
I attended the City of London jam on Tuesday, we met for Pizza first then went to the pub for our usual get together. I think I have missed the last three months due to other commitments so it was nice to get back. It was nice to meet up with everyone and I have started to post the pictures from the event here, London Jam.

I did a celebrity party last weekend which was super hero themed, I was not informed of this but got by and when home had a play with a Batman idea which then turned into Ironman. So it was nice to try a few different designs, the pictures of how the design got from “A” to “B” are here on balloon chat, Batman.

Today was spent filming some tutorials for BalloonTube, I had eight designs all ready to do and if we got six of the filmed I would have been happy. Well I’m not sure I have had a day like this before, the first seven designs were all done in one take. Not one pop, muddled words, all seemed to flow. We did have a little hic up on the last design which was a dinosaur that I have been making for years and I muddled up the way I make it, oops. But all in all I was very pleased and all the tutorials are ready right up to April 2019. I will start a thread on Balloon Chat with the models displayed, BalloonTube Designs.

Then tonight our bunny rabbit Mr Snuffles was taken ill and we had to take him to the emergency vet where he had to be put down. Goodness we have done thousands of shows with him over the years. He was eight years old so a good age for a rabbit, still sad though. Last week we started to look for a new rabbit and on Friday agreed to pick the new rabbit up this coming Thursday, perhaps I had a feeling Mr Snuffles was due to retire. I did tell everyone at the party on Saturday that this was his last show.

Off to find the random picture of the week, it will not be random
as I already know what design I will be sharing, Batman. 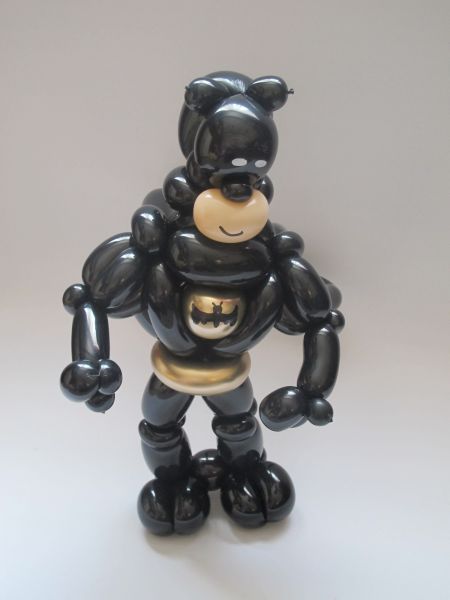