This week I had two days of pre building for a photo shoot. It was odd finally working as the last time was at the end of February for me. I did 10 hours for one day and 8 on the next. Yes I did ache a little. It was  big build for David Crofts for a pop video shoot that was filmed on Thursday. David was pre building for 5 days so they did have a lot of designs on the set.
I have started to post the designs I made onto the balloon forum. I have only just
started so it will take a few days before they are all up. Big Build Tuesday.

I did not do a Facebook Live this week which did feel unusual but was probably
for the best as I was pretty exhausted after the two full on days.

I have been making a few cars this week, I’m thinking about doing a tutorial next week with a few variations on a theme, I have started to post a few of the cars here, Car Design.

Not much else to report really, our boiler packed up and they are coming to look at it tomorrow, I went to see my grand daughter play footie today for Sutton United.
She did score a hat trick in the first half so that was nice to see.
That’s me really for this week, off to find the random balloon picture for the week.
I went with the double circle that I made last weekend, it was interesting working
out the diameters and sections so the design sat flat. This I think was version four. 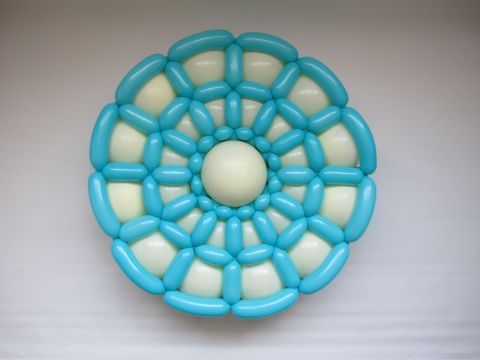