Hello to all who come on and have a read as to what I have been up to. This week we spent two days filming some designs for my BalloonTube channel. We filmed 10 designs, flower, bow and arrow game, handbag, dolphin, penguin, swan, poppy troll, panda, large sausage dog and a snail. The plan for next year is to post a tutorial every other week. Hopefully that will not be too stressful and we can keep up. I have filmed from 18 months ago 6/7 Geo Blossom designs that were going to be on a DVD2 on Geo designs but we never got around to bringing it out so they can also go onto the youtube channel next year. That means I have the first six months for next year all filmed, insert a smiley face here.

If anyone would like to purchase the Geo DVD as it is on sale for December.
Blossom with Geo’s.

We did a few magic shows this week as well and worked in the poshest house ever yesterday, it was stunning. When I say house we were actually in the swimming pool/playroom, that was stunning and they had a tree house to die for. With a secret room and a slide to the outside from behind a mirror, it was like from a film set. The other thing I should mention is the hosts were really nice, came up and spoke with us before we started and then at the end very complimentary about the balloon designs we had been making. It will go down in the memory banks, fingers crossed we go there again next year. They had four other children’s entertainers there, a face painter, myself and a 15 strong choir came and sang for 30 minutes which was excellent as that gave me a natural break to get a coffee. It was like the perfect party.

I was also up in Chelsea working on Wed at a Christmas fair for a playgroup, I got lucky with parking as I usually go up on the tube but for Chelsea it’s a 10/15 minute walk from Sloane Square. I found a 2 hour parking bay but was booked for a two hour gig so needed to stay for 3 hours. The nearest pay machine was broken so I walked to the next one, that too was broken so by the time I found somewhere to pay the area was 4 hour parking so I paid to stay 3 hours even though we were only on a 2 hour bay. I got lucky and did not get a ticket. The other cars in my section all had notices saying machine not working so at least I did pay to stay there, even though it was for longer than I should have.

Off to entertain the Scouts this afternoon with a 45 minute magic show and then a 45 minute balloon game show. There are about 60 of them so a small group. In previous years we have entertained the whole area and had over 200 people watching. I usually take two speakers for that show to make sure they can hear me, this afternoon I think the one speaker will be OK. Off to hunt out the game show as it’s been a while since I performed it.

This week on balloonTube we have the one balloon Dinosaur. BalloonTube.

I’m still adding the pictures from the two star lectures that we had in November onto the balloon forum.
Matt Falloon. Pictures.
Alberto Nava and Daz Cooper. Pictures.

Off to find the random model of the week, I’m going to go and take
a picture of it now as it’s a reindeer I made up yesterday for the party
I was at and I mashed this one up on the spot as it’s been a while since
I made a reindeer, probably about this time last year. 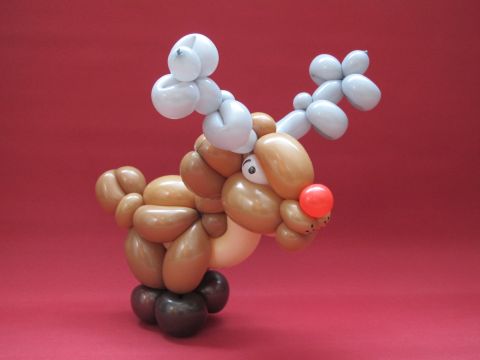