I think I missed writing my blog last week, oops.

It was the anniversary for Balloon Chat the other week as well, it was on the 1st April 2008 that we started the forum so it’s just become a teenager. It as also the anniversary of starting up The Balloon Artistes guild on the same date, the 1st April but in 2011, so BAG is only 10 years old. Many happy memories of all the balloon days and star lecture days we have run over the years, it runs into hundreds now. Here is to many more as well………….sometime soon XXxx.

It was BalloonTube and also Model of the Month last week as well, I’m wondering if I did forget to post or the site has been updated and they got missed off being added back to the website, perhaps we will never know. The balloonTube tutorial for this month is the Love Heart design that I made originally over two years ago, you can see I’m pretty quick at adding things to BalloonTube, he he, BalloonTube, Love Heart.
For Model of the Month its the Snake design that I think I posted for the first time over a year ago. It was made then with 350’s but I down sized the design so hopefully more people will have a go at making it and used 260’s for the design, Model of the Month, Snake.

So this week I went up to London to feed the Parrots in the park with Kat and Danielle’s family, it was a fun afternoon but a little tiring with all the walking about. Nice to be out and about seeing people though so that was nice.

Just making up a number 14 for my grand daughters birthday tomorrow, will post sometime soon. I tried making the boxed weaved frame from a 350, I used a 4 finger bubble which I think for the larger balloon is to small. If I made again with 350 I think the squares need to be a little larger. Still it was an idea and you have to try these things otherwise the artform would not progress.

I have my first magic show booking in over 13 months next week, now to say I have forgotten my act might be an over statement but I have put on a DVD to watch it and to refresh my memory. I’m smiling away here, will be a little more awkward as well as I’m not allowed any helpers up and also have to wear the clear plastic face mask which all adds to the excitement or the tension. So fingers crossed as I’m pretty sure we will be a little nervous about performing after such a long break. But everyone else is in the same boat, I wish them all well.

We have added two more Zoom-A-Balloon workshops to the website, on the 21st April I’m showing a Princess design and then on the 11th May we have booked Patrick van de Ven for another workshop that will include his Guinea Pig design plus two more of Patrick’s wonderful designs. Booking details, Zoom-A-Balloon.

Off to find the random balloon model of the week.
I went with the Princess design I made a couple of weeks back now.
There are a couple of other designs and variations over on the
forum, Balloon Chat, Princess. 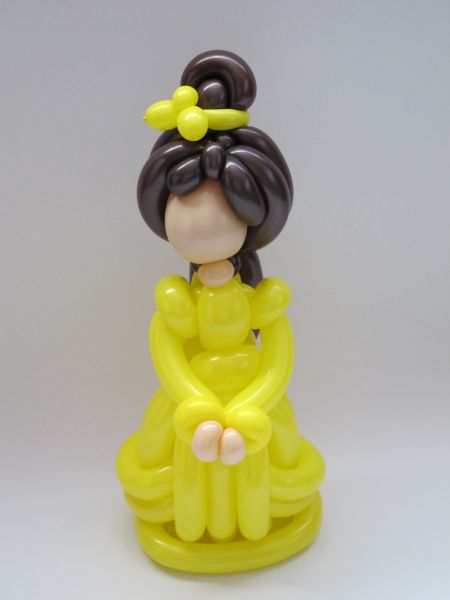