It’s BalloonTube Sunday today and we are putting up the Dinosaur design that I must have been making for possibly 10 years now. This is tutorial number 64, BalloonTube.

Over on Balloon Chat the model of  the month is a Buzz Lightyear wristband and that is tutorial number 100, I was surprised as I did not think we had that many up. Model of the Month.

On the website we have now got a section for the 7″ Rounds which are the chrome rounds. Plus there is a Chrome Rounds section as well for both the 7″ and 11″ round chromes. On the modelling side the chrome are still in with the 260 section but we have also updated with a neon/chrome page as well to hopefully make it a little easier to find them.
Chrome rounds. Neon/Chrome 260’s.

I had a couple of gigs this week, balloon workshop in a private school for 12/13 yr old boys. I did have to work at keeping them under control but the majority were engaged and its fun seeing the ideas they come up with. Then I did a magic show for a little playschool. If only someone had filmed it as it went really well, I know one should not say this but if I enjoy the show then I think its a good show…………and it was. One I would have liked to have kept on film to show others.

I’m adding the pictures still from the Eric Weinstein Master Class days we had a while back.
I think they should all be up by the end of the week. Eric Pictures.

The Twistin Twins world tour will be in Airdrie Scotland on the 1st Oct and Birmingham on the 3rd Oct. Come and meet possibly the busiest balloon modeller in the UK at the moment, David Crofts, he will show you some new designs he is working on while talking about his TV show “Ballooniville” with all the ups and downs of getting it on air. More details about the show, Ballooniville. And to book to attend the day, The Twistin Twins.

That’s me for this week, off to find the random balloon picture to post.
I went with Toothless that David Crofts and I built a couple of weeks back.
There are a few pictures as we built it over on Balloon Chat. Toothless. 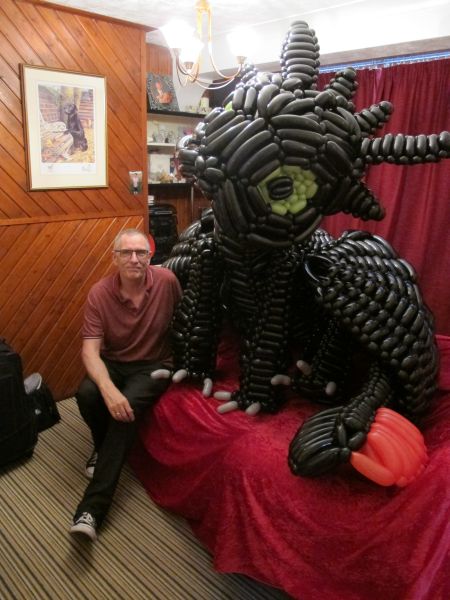