We are back from our world tour with David Crofts as “The Twistin Twins” I know we only went to Airdrie, Scotland and Birmingham, England but we had fun and enjoyed it and fingers crossed those that attended picked up a few things along the way as well. I have started to post the pictures from Airdrie and then will move onto the ones from Birmingham so might not be till the end of the week that all the pictures are posted. Airdrie Pictures.

David and I did have a good laugh and enjoyed the trip, it was a shame a few more did not attend as I know many have said to me that no one comes up to Scotland. But then when you do the turn out is very low and we will have to try and find a way of saying happy to come up
to Scotland again but we do have to have minimum numbers before we confirm the day.
So balloonies of Scotland, it will be down to you for next year.

I did a show yesterday that was very important to me, a young lad my daughter knows who unfortunately only has a few weeks to live and is just turning four. It was a little emotional and obviously I wanted it to go brill, now one should not say but it went OK, well more than OK, I was pleased. Unfortunately he did get upset at the end for a very short while which you think now was that me, his age or tiredness and his illness. Those at the party put it down to his age and his condition but it did and does bug me a little, but knowing I did made him and the others there laugh and have a nice time I think out weighed him getting upset. I hope so,
one has to say life does seem unfair sometimes but hopefully my little show helped a
little for a few minutes or two anyway…XXxx

It was BalloonTube Sunday today but we put the tutorial up last week as it was for Halloween so gave people an extra week to view and practise it. It was a pumpkin, only basic but it has got some nice comments and quite a few views as well so looks like its a winner for a few people which is nice. I have also started to re title some of the tutorials to see if we can up the hit rate, Its also been suggested I add a nice picture to the front of the tutorial instead of myself and my two wall pictures. I have changed the machine gun tutorial at the moment and will make some of the designs again and get some nice pictures to add. A picture of the design being taught  might get people to click through and view as its the design people are after making, they are not worried who shows them or the quirky title of my YouTube channel or myself either, its just about the design. Its taken me a while to realise this but then its all a journey in this funny old life of ours. BalloonTube Pumpkin.

That’s me for this week, off to find the random balloon picture of the week.
I went with the baby design print we are hoping to produce. I thought
this was a unique design but have found out its been available in
America for the past four years or more.
The artwork is unique to us but the double sided print has been
out a while, oh well as they say its back to the drawing board. 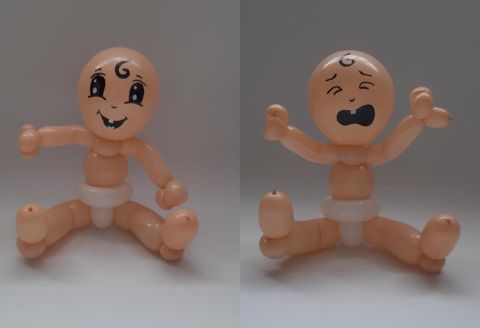