It’s Sunday so it’s blog writing day. So what have you been up to this week Graham?
Well thanks for asking………………we went up to Birmingham Tuesday night for a face painting get together on the Wed. Numbers were down on what we were hoping for but it was nice to catch up with Pam Pearce my Midland’s secretary along with Sandra and a few others we have met before and it’s always nice to work with Thelma on the stand. As we got home on the Wed I went to my Surrey magic club Thursday night for a James Brown lecture on magic and hypnosis. It was an interesting night but went on far too long for myself, club nights finish 10.oo/10.15pm. James finished at 10.45pm, he was getting many questions on the subject and was holding peoples attention so it might just have been me.

We then had another big build Friday with David Crofts, it was rather leisurely this time with just one large 7ft dragon to build for the premiere of Pete’s Dragon that David invited me to help with today. It was at a new cinema for us, under a hotel in Soho, The Queen’s Theatre, Ham Yard Hotel. A very interesting place and the toilets were well posh and luxurious. So after the film started David and I went off to Leicester Square for a Wetherspoon breakfast and a catch up, we worked three days in a row, and David is an absolute diamond, a lovely person. Dragon Pictures.

We have two confirmed Care and Share balloon days lined up,
Lincoln 12th Sept
Manchester 2nd Nov
There are some early bird offers still available on the website for those who book quickly, Care & Share Balloon Days.
We are trying to book up the next two day star lecture in Birmingham with hopefully Alberto Nava running a workshop on Tuesday 29th Nov but this is still to be confirmed.

Off to find a random balloon picture of the week, before I forget the August model of the month will be a line work Pikachu. The step by step instructions I’m hoping to put up tomorrow, Pikachu.

Now the random picture, be right back. Another less I forget, I was sent a few nice pictures this week out of the blue.
Most un-expected but thank you for sending them, they were very artistic and greatly appreciated.
I went with the BMW mini that David Crofts, Roger Daws, Thelma Levett, Daniel Fudd and I built a few weeks back at the Oxford Cowley plant for the BMW open day. More pictures are on the forum here, BMW mini. 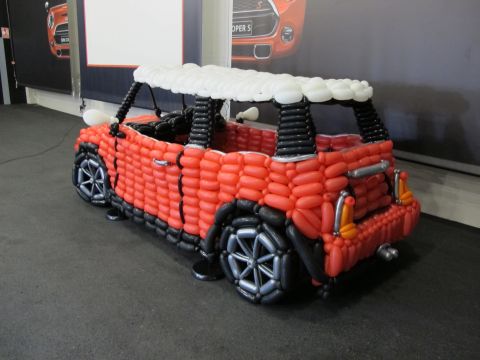