Well this week I spent three days making a Car design. I was looking for it to be an easy line work design with three or four balloons only. The sides and rear came along reasonably well but I did struggle with the front section and still not sure what design I prefer. There are over 75 pictures to have a look at over on Balloon Chat where I posted them all, Car Design.

I have also been sorting out some training days that have come in so that was nice,
like being back in the real world………….well sort off, he he

We did have a large Qualatex order come in this week so have quite a few products
back in stock, Balloon Art Wholesale.

I have been outside today trying to smarten the decking up as it was looking the worse for wear. I bought some highly recommended non toxic stain stripper and have to say its pretty good. It’s doing what it said on the tin, a little expensive but very good. I then bought a very good oil based preserver to put on after so hopefully it will keep it looking nicer. I have done
a couple of hours outside but its to hot out there now for me so will wait till about six when hopefully it will be a little cooler for me to work.

I’m off for a coffee and then will add the instructions for the Model of the Month for June. I was thinking of having the car but as I’ve only just come up with it I’m sure it will get tweaked a little so holding off on that one for a while. I was looking back at designs I’ve made over the past month or so and found a nice Dolphin from 350’s that I made after the Patrick van de Ven Zoom workshop and thought that might be a good idea as I’m sure its been ages since my last tutorial on the Dolphin………………well I was very surprised to find out that I had never done a Dolphin for the Model of the Month. So decided to go for a more basic design from when I made one for BalloonTube that was over four years ago. So this has been updated and re worked a little and I will put the step by step up later this afternoon. Balloon Chat Dolphin.

To view the original Dolphin that is a little different on BalloonTube, BalloonTube Dolphin.

We do have three Zoom balloon workshops coming up if anyone would like to join us,
1st June, Train.
8th June, Push Bike.
15th June, Numbers.
To book onto any of them, Balloon Workshops.

That’s me for this week, off to find the random balloon picture of the week.
I went with the Lizard which we have recorded for another tutorial on
Balloontube that will be coming out in the next few month’s. 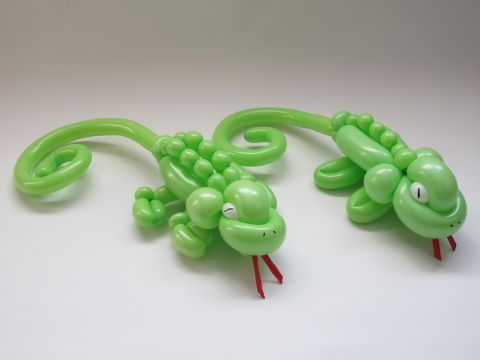