It’s Blog Sunday today, this week we went over to the Essex face painting jam. We drove over the night before as I had Phoebe my favourite grand daughter with me, when I say this Phoebe is hot off the mark to mention to others that she is my only grand daughter, still it makes us laugh.

We stayed at the Thurrock M25 services, for the first and last time, that is all I will say on the matter but it was a slightly nervous stay with all that was going on.

We arrived nice and early before nine and set up, even bought a few raffle tickets to help support the day. We did two mini workshops which were fine but only attended by children, none of the face painters came over to try their hands with the latex.

There was this one family I think with three children, well they got rather hooked and bought a pump and a couple of bags of balloons and posted a few designs they made on Facebook in the evening. For me that made my day, maybe we have set off a spark for the next generation of balloon artiste…………..that would be nice. It was nice to catch up with a few people and chat away to some new people that I had not met before. There were demo’s going on with glitter and face painting for children and adults and with a theme or two as well.

Phoebe had a balloon dog glitter tattoo on her arm and then has her face painted by Julie. The raffle, well we bought 13 tickets and won five times so that was a good return. We even won the star prize of 24 superstar face paints, now what to do with them? I will make sure they go to a good cause and do get used up by a face painter as the prize was pretty special.

Pictures from the day are posted here on Balloon Chat. Essex Pictures.

It’s nearly time for the Hamburg Jam, we are flying over to Germany on Monday 6th Nov, if anyone is placing orders via the website then Lyn will be shipping them out as usual so if you can put orders through via the website that would be most helpful, thanks.
Balloon Art Wholesale.

If you would like to book last minute for Hamburg then there are more details here,
Hamburg Jam.

We did film another seven tutorials for BalloonTube last Sunday, it all went pretty well with a Tank, Rabbit, Owl, Racing Car, Crown and a Rocket all filmed and I think the saying is in the can. Have to take the memory card down to Lord G to he can edit them for me.

There is no BalloonTube this week but to catch up with all the tutorials we have posted over the years then this is the link, BalloonTube.

That’s’ it from me for this week, I was trying to work out what the competition would be for November, it’s between the rocket and a simple Rudolph design. I’m leaning more towards Rudolph as it would be a little Christmassy and at Christmas time in the past we have done a Santa Hat and Angel so it would be more in keeping. Decisions, decisions…….what to do? Well watch this space and all will be revealed.

Off to look for the random balloon model of the week to post.
The picture started off as an axe idea I had and then morphed
into a frozen look with the mirror type look of the design. 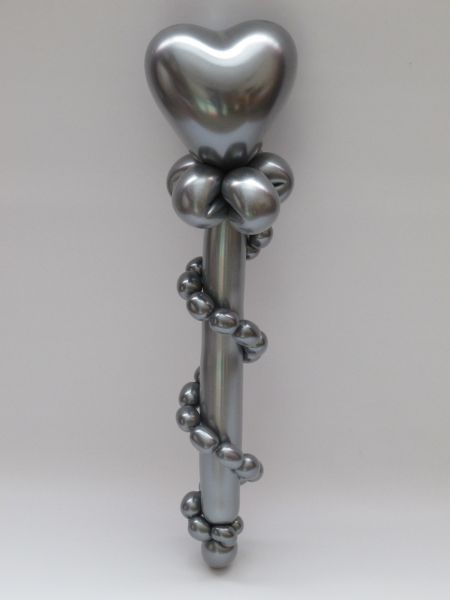