So continuing last weeks trip to Eastbourne, after Harry had a nice play in the sea for an hour we walked past a paint ball stall on the prom that was there just for the air show weekend. Harry enjoyed that and had a go at hitting the targets, he was not a bad shot. So it was back to the car as Harry was soaking wet from the sea and all his change of clothing we left in the car.

As we walked back we went past the theatre and I said perhaps there was something on we could watch, we had thought about going to Pevensey Bay to see if they had any amusements but the traffic as we walked back was nose to tail and I think we would have been stuck in traffic if we had attempted to drive there or home. So what was on at the theatre, it was Annie, Harry was keen to see it but I assumed it was not a musical for him so walking back to the car he told me the whole story of Annie, I was impressed as Harry is 12 and I thought this would not be his thing. So we got him changed and went back to see the price for tickets, I said if it was £20 for me and a tenner for him that would be OK. It turned out to be twice that price so I made out it was too much and lets go get a drink etc which we did and then we walked back past the theatre and Harry is trying to persuade me to get tickets. He did not know that I had decided to get them but was just making out we were off back to drive home so he was a little excited when I said lets go get the tickets then. And we had a nice evening at the theatre, Craig Revel Horwood was the lead dressed as a woman and played the part of Miss Hannigan, so with an ice cream in the interval and a no hassle drive home our disaster day turned out to be one to remember. Just waiting for Harry Ramsden’s to get in touch about our meal.

This weekend we went to Rye and crabbing with our grand daughter Phoebe, not a bad day. Caught 16 crabs and spent time in Hastings on the amusements and rides as well and no hold up with traffic either.
So a random balloon picture again, now what shall it be? 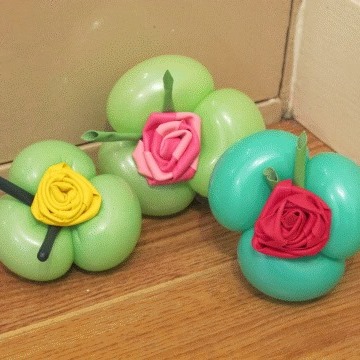