This week was a little eventful, I did not mention to many but I entered my local magic club stage competition with my balloon magic act. I think the last time I performed the act was possibly 6 or 7 years ago, I stopped as it was too stressful for me. I used to worry a lot about performing the act and then rehearsing it over and over and far too many times. So at Kidology back in Sept Alec asked the dealers if they could perform a little spot one night, I said I could do a couple of effects from the act, the easier ones with not to much rehearsing. I did two old effects and actually came up with a new effect as well, it all went OK’ish.

Then they announced details about the magic club stage competition and after a little encouragement and as the Kidology night was not too stressful I thought I’d give it a go. I decided I would only rehearse the act on the actual week of the act so ran thru it on Monday night then Tuesday and Wednesday and performed the act live on Thursday night at the Nomad Theatre where we meet. While sorting the act out I did come up with a new variation on my cut and restored balloon, now to others they will say so what but for me it was a light bulb moment and made the sequence so much cleaner, I was chuffed so I did run through
that a couple of extra times but not to many like I used to do.

So come the day and night of performance I was a little nervous which is good to get the adrenalin flowing and helps but it was all under control. Performing for other magicians is very nerve racking but I was actually looking forward to it. It all seemed to go OK, the new effect got a good laugh, a couple of new gags went in the act, one got a nice groan and the other a good laugh so all in all I was very pleased. I was on first which was a bonus as it got it out the way and I could watch the rest of the acts. I enjoyed the other acts and thought it was a high standard of competition. Usually you have one or two doing comedy but this night all seven acts had comedy elements in them, I enjoy a good laugh. So will I do it again……………yes.

And the result, I came third in the magic competition which is judged by two non magic judges and one magical advisor and then was rather chuffed when they announced that I had won the Bernard Weller Comedy Trophy which is voted for by the magic club members. After magic club a few of us go out for a curry and Bernard used to always come along, he had a wicked sense of humour and a great knowledge of magic and used to run a pre club get together teaching certain magical moves. He was a wealth of information.

So that was my eventful week, I’m off out today over to Bluewater for some balloon modelling as covering for someone who is unwell.

I have started to post the pictures onto Balloon Chat from the Star lecture days we had with Pip who came over from New Zealand. I think I have posted all from day one so will take a few more days to post the others from day two, Pip Pictures.

Model of the Month for December on Balloon Chat is the Elf Wand. Full step by step instructions are on the forum, Elf Wand.

And as it’s Sunday could it be? Yes it is, its BalloonTube Sunday and today we have gone with the basic Princess Crown. Next time I should give it a little thought and post something more seasonal, never mind. Princess Crown.

That’s me for this week,
off to find the random balloon picture of the week.
I went with the Girl I made this week,
I like the flow of hair and the look of the dress. 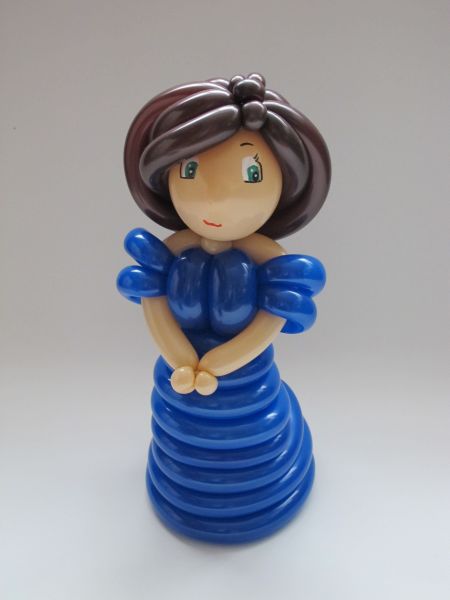