This week we have been getting things ready for the Sam Cremeens workshops that are happening next week 20th and 21st Nov in Halesowen, near Birmingham. Both days will be different with a large wearable design shown at each day. The aeroplane on Mon and the pirate ship on Tuesday, there are still spaces available if anyone would like to come along. Sam Cremeens.

We spent Friday and Saturday taking Sam around some of the sights up in London, with Kat and Danny being the tour guides for the days. I have started to post some of the pictures if anyone would like to view, Sightseeing. I did the Christmas light switch on in Guildford on Thursday, I did not switch the lights on but entertained the crowds during the day. All seemed to go well and looking forward to working with them again soon.

It’s good old BalloonTube Sunday this week and we have added an extra design in than was planned as it’s a little Christmassy and I thought might be useful to learn before people get too busy with Christmas shows, it’s the Angel wand design that was inspired by Susie Hillman at one of the London Jam events that I attend. Angel/Fairy Wand.

There are a few Christmas shows coming in but I think like many we can all do with one or two more so fingers crossed a few people will be booking a little later than normal………..well we can but hope.

I have been making some crowns this week form a flower design that I saw a while back at the Sabina Kellner Care & Share day a while back and was reminded of it at the Hamburg jam last week. I also had another little play with a face design, well it keeps me out of mischief.

That’s it for the time being, off to find that random balloon picture of the week.
I went with the Owls that we made a few weeks back, the step by step instructions
are over on Balloon Chat if anyone wanted to have a go at making them. Owls. 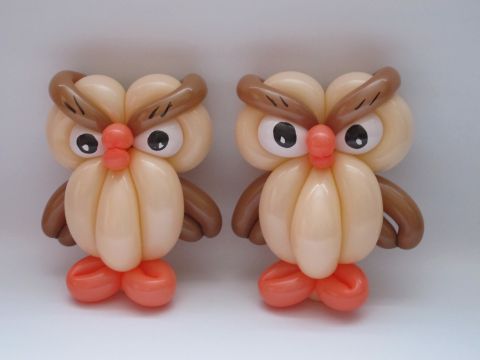