So this week we have been planning the Christmas edition of “Twisting Fun 4 Everyone” There are five h at designs on the tutorial starting off with two simple designs, the Father Christmas hat and the the Elf Hat. Then moving onto the Reindeer hat and finishing up with the Snowman hat and Christmas tree hat which are the slightly more harder designs to make. Hoping this will be more of a hit than my last tutorial project of the basic balloon modelling designs which did not sell very well. Still its better to try things that don’t work out rather than sit about moaning about things. I hope to have it all finished and ready to promote for the end of October so there is plenty of time to push and promote the Christmas edition of the tutorial. There are some pictures here to view the designs we have made, “Twisting Fun 4 Everyone”

All the Christmas bookings have been cancelling over the past 10 days, understandable but still a shame as some of the nurseries I have been entertaining at for coming up for 30 years, it will seem very odd and strange not having any shows in December. And it still looks like there is no end in sight to when we will all be able to mix and mingle again. I have been 8 months now with out entertaining and the other things I have tried to bring in a few pennies have not seemed to work out as yet, I’m still smiling though. I have just filmed a new section for BalloonTube, not sure I’m going to post and make it live as it’s explaining that between Balloon Chat and BalloonTube we have 200 tutorials posted and all have been free till now. The November design which was planned for a Father Christmas Wand I have explained that rather reluctantly I’m looking to have this as a pay to view tutorial to try and help bring in a few pennies. The Digger tutorial that we posted at £5 did not sell well. I think more from no one working rather than it being over priced but I have to take that into account, although from the £5 I only receive £3.52 after charges and fees etc for each design sold. I’m thinking of asking £3 for the Father Christmas wand, so its just the cost of a cup of coffee and seeing if with it being a seasonal design and more affordable we might bet a few more sales. Only one way to find out. I do have to say I’m very reluctant to charge as for over 12 years all the tutorials have been free. Right, that’s enough from me now.

Off to find the random balloon picture of the week. I went with Chucky which was the Balloon Chat Challenge that Danielle and I do every now and again. We were meant to do a Halloween design so we both tried something different but somehow we both ended up picking the same design to make. There are more designs from this years challenge’s here on this thread, Balloon Chat Challenge. 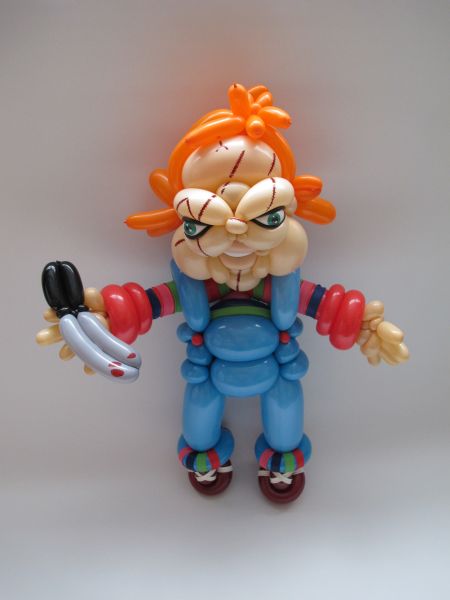