This week we have been finishing off the balloon warehouse, the last of the new storage boxes got delayed in transit. Well the courier did not have a big enough van to deliver the order, after it being delayed for two days they sent it over to us in a local taxi, made me smile.

So we finished off the boxes, added the counter to the centre Isle and moved electric’s etc. Then it was onto changing all the box numbers on the website, we have approx 450 and it was taking a minute an item so it was a few hours work. Still have another 100 boxes to change over but we are getting there. Pictures from the warehouse I have been adding to the forum if anyone wanted to view. Warehouse Pictures.

The official opening of the warehouse is on Tuesday morning and I have a mini celebrity coming to do the grand opening. I will post pictures onto the forum later on in the week.

It’s the London balloon jam this week on Tuesday and there are a few going if anyone else would like to pop along, we meet at two for pizza as well and all are most welcome.

I have a few bags of balloons on offer at three for the price of two as we have found some items that we will no longer be stocking. Please get in touch if you would like the full list.

Looking into going over to Twist and Shout balloon convention in Las Vegas in January 2018, it was a challenge booking the hotel last time we were there in 2016 and by the looks of the way things have started this time around it seems like nothing has changed.

It’s not BalloonTube Sunday this week but to see the Panda, Dolphin
and many others then this is the link, BalloonTube.

My grandson Harry had a fundraising event yesterday in Banstead, he is raising funds so he can go and work in an orphanage for 10 days next year. They held a tea party with bouncy castle and I made a few balloons. There was a raffle and I won two prizes, I took one and donated the other back for the next event they have to raise a few more pennies. I believe they raised over £300. I also offered a free magic show to be raffled off later in the year, it will be a little selective with only 40 tickets sold at £5 each. So if you would like to win a magic show performed by yours truly then get in touch, the only down side is the show has to be local.

Been a little quiet with the balloon modelling this week due to all the changes going on, will go and find a mystery balloon picture of the week to post. I went with the ride in unicorn that we made for a party a few weeks back now. 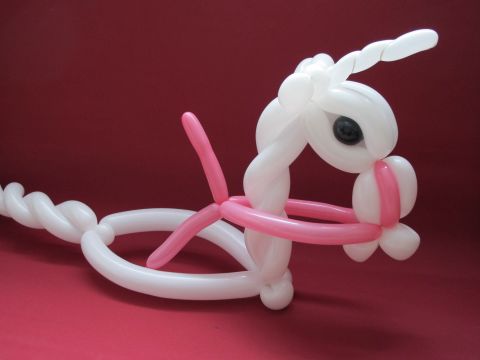