I enjoyed the convention but numbers every year seem to get smaller and also the people attending older, I suppose its the way of the world as you can see everything online now and there is no need to attend conventions. There is something about them though that is not available if just sitting at home, the camaraderie, like minded people talking shop and giving you ideas on how to entertain and improve your point of sales etc. So yes attend a convention or two…..definitely.

I had three long days ballooning this week with day one the opening of the new “Back to Nature” garden at RHS Garden Wisley. They did have a Royal guest doing the opening with the Duchess of Cambridge doing the honours. There have been a few pictures going around the internet of her with the balloons I made on the day and the face paining from Danielle who worked with me on the day. A nice prestigious job for us both and one to remember, I have posted a few of the pictures here, Royal Gig.

One of the pictures has Kate with a young lad holding the end of a dinosaur tail but someone commented I was making cucumbers……..so as a joke I have posted the step by step instructions for the said Royal Cucumber, Cucumber Instructions.

Off to London on Tuesday for the London Jam, more details about this can be found
here on Facebook, London Jam.

That’s me for today, off to find the random balloon picture of the week,
well no need to look as its going to be the Royal picture of Kate and the
Princess Crown I made at the event. Step by step instructions for the
design are posted here on Balloon Chat. Crown Design. 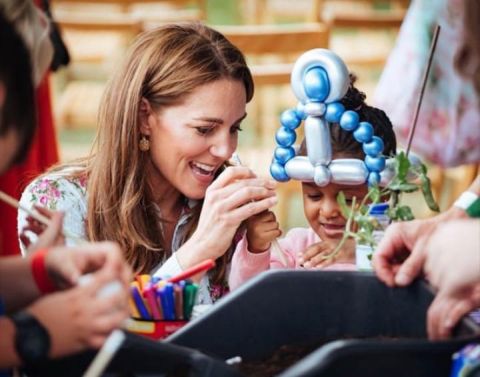