We had the Birmingham Star lecture days this week with Twistina and Darren Mortiboy. Both days were very enjoyable and I’m still trying to catch up with everything after being away for a few days. All order and emails were sorted out the next day but putting all the balloon stock away is still waiting and hopefully will be done early next week. We have also started to advertise the Sam Cremeens days that will be taking place in November in Birmingham. Booking Details.

I covered for a friend today at a magic show, he had a hip replacement operation and is out of action for six weeks so I went and covered for him over in Beckenham. The party went OK but was a little noisy due to the DJ playing deafening music for the first hour and hyping the children up. We managed but did have to work a little on a couple of occasions to keep
them in check.

Hoping to do some more filming this week for BalloonTube, if all goes to plan I would like to film at least six tutorials in one day. So that should keep us busy for three months as we only post every other week now. This week we have the balloon Dolphin design, although I have re-designed it since we filmed, see balloon modelling is always evolving. BalloonTube.

The random balloon model of the week, now what shall it be?
at the moment I have no idea so off to look and see what we have made over the past 7/10 days. I have gone with the cooker design that Thelma Levett and I made at the Blackpool Magic Convention a few weeks back. This was version one, Thelma made the knobs a little bigger on version two. The idea was for someone to get inside the cooker and have their head sticking out from the frying pan so a friend could be cooking them. More pictures from the event and version two can be found on the balloon forum, Balloon Chat. The apron and hat are also all made form balloons along with pots and pans and cooking utensils. 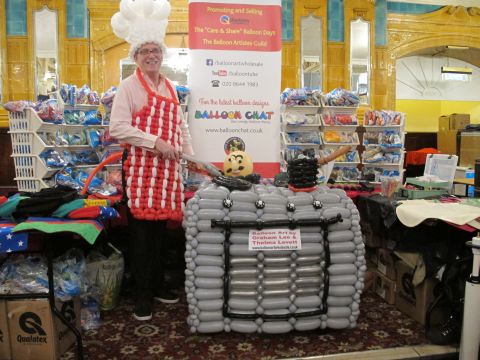