So this week?
We went out for a nice meal and a catch up with Mike & Heather.
It was a fun night.

Been updating the warehouse still, nearly got it finished, the only problem is we have added about 75 more boxes so have to move all the numbers about and re-do the picking numbers to products on the website, there are over 400 to change again. I will try to do it in stages and a couple of hours a day. Pictures from the latest warehouse up date are on the forum from page eight. Warehouse Re-vamp.

I had a late booking come in for Saturday up in London, the party went OK, a couple of sticky fingers trying to get the balloons and touch the pump but nothing too drastic. On the way home the walk back to the train station was fun as we met approx 100 cyclists on the round London cycle ride, the only thing was they were all naked. It was to raise awareness for cyclists in London, it certainly put a smile on everyone’s faces……………including me, good luck to them. It was funny that some had their faces covered up but were happy for everything else to be on show.

Off to the Leamington Day of Magic on Wed, I will travel up on Tuesday night ready for the early start. There is still time to come along if you fancy a nice day out at an amazing price, included in the price is breakfast, a buffet lunch and also a BBQ late afternoon so you will definitely not go hungry. Leamington Magic day.

There are some special offers on the website for the 646’s and also my full set of DVD’s.
Balloonartwholesale.co.uk.

BalloonTube is still plodding along, we have filmed Pichaku, Crocodile, Mickey Mouse, Ride in Horse and a cat for the upcoming designs. Last week was the one balloon Camel. BalloonTube.

Off to find the random balloon picture of the week.
I wonder what it will be this week?
The Sea Turtle, the tutorial for this design was posted onto
BalloonTube a few weeks back now, Sea Turtle. 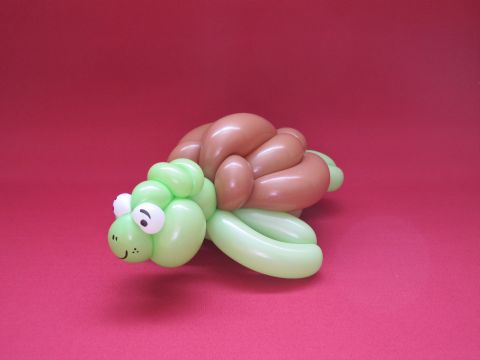