We are getting ready for the Blackpool magicians weekend which is next week but have to drive up Tuesday night to Thelma’s so we can be in Blackpool for 2pm on Wed to start setting the stand as we open Friday morning at 9am rather than the normal time of 1pm on Friday. Everything has shifted up half a day. Thelma is only just back from being in New Zealand for six weeks to help her daughter Vicky with the twins she had just before the New Year.

The plan for Blackpool is to make a sit on motorbike, the last time we made this was at the Kidology convention 4/5 years ago. The picture is on my facebook page as the header if you would like to take a look. Motor Bike.

I have bought a drum stool shaped like a motor bike seat to hopefully set the design off. I have started to post the pictures up onto Balloon chat if you would like to take a look. Motor Bike.

Last weeks BalloonTube tutorial got a nice reaction, funny when you think a design is OK but get many positive comments, that was nice. The tutorial was for the Owl, BalloonTube Owl.

We are getting a few more bags of chrome 260 modelling balloons into stock, only four colours so we will not be making these up into mixed bags until we get the full range. They will be on the website as single colours and in bags of 100 count bags. Chrome 260’s.

I had a couple of magic shows this weekend, it was nice to get back into the swing of things and to see the children laughing away. I really enjoyed the shows, if anyone would like to book a magic show this is my website, Graham Lee’s Magic.

I went down to Portsmouth on Wed for the Jam that Rob Driscoll organizes and it was nice to finally meet his mum and dad, I have been down to Portsmouth on many occasions and they have never been around. I was beginning to wonder if they actually existed, he he. I’m putting the pictures up onto balloon chat from the Portsmouth jam and also from the Twist & Shout convention that we attend back in January. I expect there will be no blog next week as I will be working away on the stand up in Blackpool so will see you all the following week.

Off to find the random balloon picture of the week.
It’s the Tiffany lamp this week.
There are some variations on balloonchat, Tiffany Lamp. 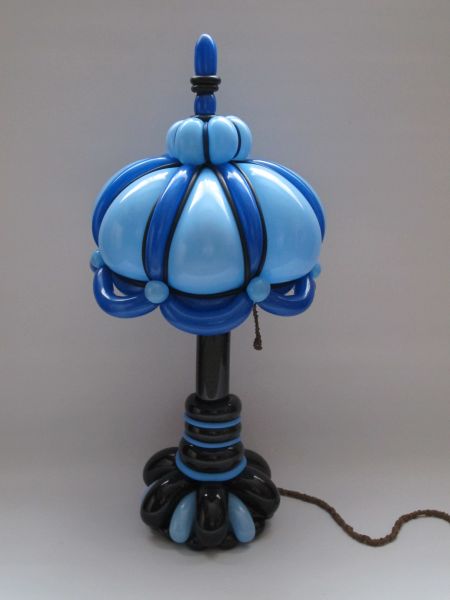