So last week I was at the Country File live show at Blenheim Palace working for Kerry on the O2 stand. It was long days and I was a little concerned about doing four days on the trot with them being 9 hour days. The hardest was the morning of day two, but I loved it and really enjoyed myself. Not sure some of the punters did with my constant waffling on and banter. Hopefully the majority did and I think the staff on the O2 stand did which is the most important thing. It is odd working with another twister as we are so used to always working on our own, thanks for the gig Kerry and fingers crossed we get to do it all again next year. We also had a quick chat with Twistopher who was working on another stand over the weekend so was nice to catch up as it’s been a few years since our paths have crossed.

Its the London balloon jam this Tuesday, please double check on Facebook that its going ahead as the last couple have been cancelled due to people having work commitments etc.
London Balloon Jam.

Just come back from ballooning in Tunbridge for a charity event, The Rays of Sunshine where they had some costume entertainers, a face painter and myself and a couple of members of staff, one having his very hairy legs waxed and then another having his very long hair shaved. His hair was being sent off to make a wig so that was extra nice. I enjoyed the event and bought a few raffle tickets so fingers crossed for the draw at the end of the month.

We are slowly getting product back in stock, we were low on a few items mainly as there was none in the country. We still have a few things we are waiting on but they are on back order
so as soon as they arrive we will be getting them ASAP. Balloon Art Wholesale.

That’s me for this week then, off to find the random balloon picture of the week.
Going to go with the last challenge that Danielle set over on Balloon chat as
I really struggled making the face, the one below I think is version
five that I tried. I will be posting all the versions on there own
thread over the next few days. Balloon Chat Challenge.
I have not posted Ironman anywhere as yet,
this is its first outing on the internet. 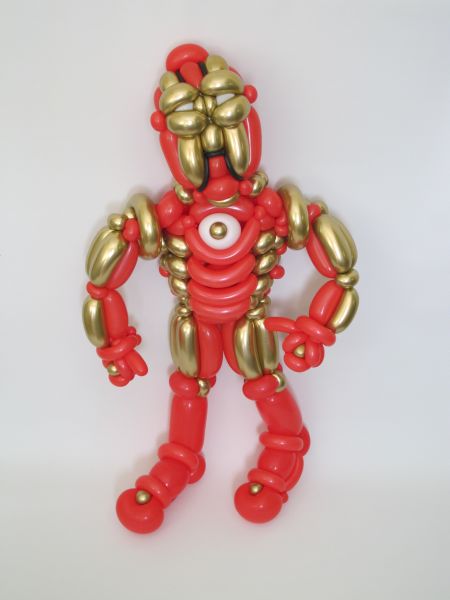